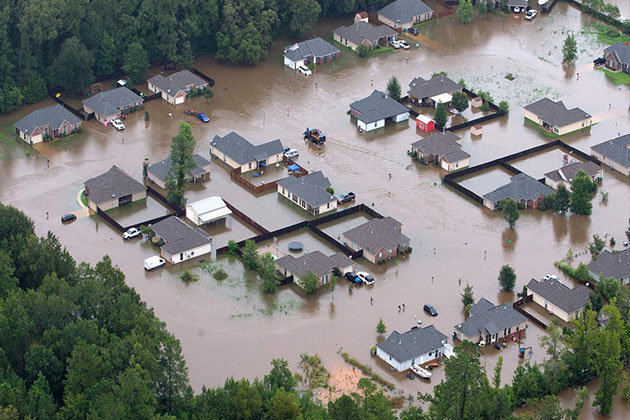 If you are a resident or business within the 20 parishes that have been declared a federal disaster area due to the August 2016 flooding, you will be able to claim losses from the flood on your 2015 income taxes even though the damage was incurred this year! This is a special provision contained in the federal policy whenever the president officially issues a disaster declaration (President Obama did so in August).

Individuals and businesses can claim the loss in the previous year’s taxes by amending their 2015 returns. The Advocate in Baton Rouge has an excellent detailed article about this.

Most losses that were not covered by insurance policies or through other reimbursements can usually be used to reduce the amount of taxes owed. However, in the case of a federally declared disaster area, taxpayers can get quick tax money back relatively quickly by amending the previous year’s returns. The deadline for taxpayers to amend their 2015 returns is April 17, 2017.

Those who asked for a filing extension before the April 18, 2016 deadline for their 2015 taxes will now have until Jan. 17, 2017 to file. Previously, the deadline extension would have expired in mid-October.

Those who pay their taxes on a quarterly basis also have been granted a reprieve until Jan. 17 for their third-quarter taxes, normally due in mid-September.

Businesses also will get some relief because of the disaster declaration, including an Oct. 31 deadline for quarterly payroll and excise tax returns, which has now been pushed back to Jan. 17 as well.

The Louisiana Department of Revenue has announced similar deadline changes for state taxes and filings due over the next few months. And both the feds and the state have waived late-filing penalties.

It must be stated that there are many factors to consider prior to going down the route of amending last year’s tax returns. The IRS website provides access to a number of publications and forms, including Publication 2194, “Disaster Resource Guide for Individuals and Businesses.” Naturally, the most recommended method for staying informed or tax requirements while under a disaster declaration is to visit irs.gov (the Internal Revenue Service website), or to consult a tax professional.

“The state will reimburse you for the state sales tax you paid on any portion of destroyed property not reimbursed by insurance or disaster relief,” said Treasurer Kennedy. “The reimbursement applies to furniture, rugs, utensils, clothing, linens, televisions, cameras, toys, exercise equipment, books and even lawn mowers.”

We're always available to help out, get in touch with us any time, or shoot us an email.

Thank you for contacting us, we'll get back to you shortly.

Sorry, we are unable to send your message at the moment. Please try again later.